Meta love and memories from our online discussions of Fringe with The Fringe Report and its lovely fandom back in the olden days. Happily, you can relive it ALL on Netflix! 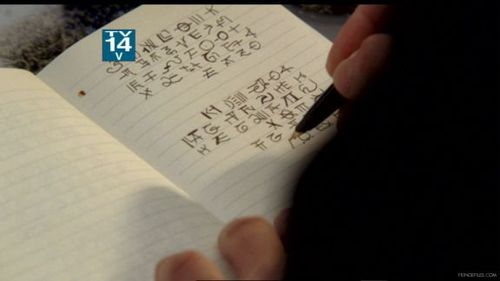 In the same vein as ‘Walter’s Lab Notes’ published by Fox for each episode of Fringe Season 1, TFR’s Notebook will share a variety of comments, musings, jots and doodles as they enter the weekly stream of consciousness known as The Fringe Report. (TFR)

The Fringe Report was full of ideas, theories, snarky comments and weird science tonight. Everyone was high on Fringe after watching episode 2.15, “Peter,” and surviving (barely) an eight-week hiatus. I had to break down a book-length transcript into an outline just to organize it.

Many CortexiFans, old and new, gathered early just to listen to TFR “radio.” DJ Evil Ian’s dance party sparked a rollercoaster of reactions: warbling, gagging, jumping on couches, ROFLing, and walking like Egyptians. RedViking4 felt the need to SHOUT, SHOUT, LET IT ALL OUT.

Levi introduced himself as Eric Stoltz, but almost no one was fooled. MaxHeadroom6 said, “I thought you’d be taller.” The 1985 alternate reality scene with the Observers should have included dented cars with Van Halen bumper stickers.

Levi and Ian share a moment during “Can’t Fight This Feeling Any More” – disappointed, Craig sighs a fatherly sigh.

Lots of blogging going on at TFR, along with the always fabulous video podcast, audio clips and must-see links. Craig has already expanded the site to include new pages, accessible through tag searches and links on a grey bar near the top of each page. More pages to come, including the Timeline, Walter’s Cravings and Theory Scoreboard. All are community-based projects. Everyone will be able to contribute information and facts will be checked as we go along to ensure the most accurate Fringe data possible. (Check the site and podcast for more details as they pop into our heads.)

Note: TFR is going with the chat room on uStream, and Craig says Tumblr may be coming out with more features next week to allow the chat screen to be larger. Xerophytes/Allan suggests: open your eyes wider to make the chat screen bigger.

Waltersfood/Aaron did some awesome blogging in the 17 Theories this week. He’s making blog editors look bad with random acts of spoofage. He credits the LSD someone slipped into his think tank.

Don’t forget the CONTEST! Send your ideas for a catchy (or at least usable) signoff phrase for Levi by April 15. Many have thrown more or less constructive suggestions out there on the comments section and in the chat, but please submit signoffs to TFR via email so we can trace them and notify the authorities. Remember: family friendly and Fringe related are preferable. Winning entry gets the Fringe soundtrack as soon as it is released (latest update says April 20). Suggestions already in the hopper: “Stay shiny” “42 is the answer to the universe.”

Blinded by science this week! Noted the chalkboard in Walter’s office circa 1985 displayed a four-quadrant drawing labeled A, B, C, Ω. The Omega symbol is the last letter in the Greek alphabet, and marked Thomas Newton’s frozen head. Initial theories: possibly related to quadrants of the Johari Window or a “vanity signature” used in a chemical formula (like the seahorse Walter’s father used in his formula used in “The Bishop Revival” episode).

Craig & Xerophytes/Allan believe, however, the drawing is along the lines of a Punnett Square. That is used in genetics to demonstrate the probability of certain offspring in a breeding experiment. The lower right quadrant of the Punnett Square indicates two recessive genes, resulting in a child with a certain recessive trait not found in either parent. Is this where Peter’s genetic disease originated? Could this trait shield a person from harmful effects of Walter’s disray machine or enable to survive interdimensional travel?

Random Observation #2: Waltersfood/Aaron realizes that there were no cows shown in the lab in either universe in 1985. WHAT?!

Several chatters believe Bell is already in the alternate universe during the event’s shown in 1985. Walter thinks he initiated the first “breach” between universes, but this is not proven yet. Bell may want Walter to blame himself. Did Bell cause the first “crack” and Walter just escalated it to war by taking Peter?

Ocean5oul/Bastian and FringeInsider suggest that Nina and Bell cannot be seen together in the same time or space. What does this suggest? Bell and Nina often claim to be “out of the country” when others cannot contact them. Does EU = AU (alternate universe)? Many say the alternate Bell is dead, with Bell taking his place in order to steal technology and information. At one point, Bell is said to be in Berlin – could be a Cold War connection. East or West Germany?

Highlight: Craig wows audience with another dramatic reading in the style of Walter Bishop. ROFL. Chat room in ruins. Craig nominated for something called a HEMMY. G_Phunk/George is working on a Broyles impression and offers to run lines with Craig. Waltersfood/Aaron proposes a contest open only to Craig – the prize is one week of acting lessons from John Noble.

Similar to victims seen in the Fringe 1.12 “The No-Brainer,” our minds turned to goo during a discussion of which universe/reality shown is the “real” or “primary” reference point in the show. Which came first, the chicken or the egg (Walter or Walternate)? FringeChanta said everyone’s reality is the real one to that person. Any other would seem like the alternate universe.

The primary reality could be Walternate’s universe, making the character we’ve been calling Peter 2.0 actually be Peter 1.0. Minds blown. Have viewers been watching the first two seasons of Fringe through a dimensional window all along? Jaws drop; noticeable drooling. What if “our” Fringe teammates are the bad guys? Blood oozes from eye sockets.

It may not be important that Walter crossed over if someone (Bell or earlier shape shifters) had already done it. The timeline indicates Bell/Bishop had already transported objects between universes before 1985. Cortexiphan trials began in 1981 (with Peter, possibly).

Several CortexiFans find parallels between the Fringe storyline and that of LOST. A war is coming. The computer Walter used at the lake and that Nina used to communicate with Bell looks like it came from inside the Dharma hatch. The line separating good and evil is not clear. Peter = Desmond. Observers = Eloise Hawking.

Random Observation #4: Elric of Melniboné is a fictional character created by Michael Moorcock, and the antihero of a series of sword and sorcery stories. Waltersfood/Aaron calls him “the Conan of multiverses.”

The Observers might be “time travel tourists” watching many dimensions with the goal of mending the rift between universes by observation. They seem to follow a Star Trekkian prime directive. Elevenjalepenos wonders if the Observers understand that they are part of the events as they watch. Do things happen because they are supposed to, or because the Observers want them to happen? Perhaps they only affect probabilities, not final outcome.

Perhaps September made a mistake on both sides with Peter 1.0 and 2.0. Did his mistake make Peter important? Or did Walter’s action (taking him to the other universe) make him special? Did one Peter have to die to make the other special? Why do alternates in the other universe live and work in the same places?

Consider: Peter was very brave – not afraid to die – in either universe. Christine Hollis initially caught August’s eye with her courage in the face of death. How significant is courage to their purposes?

Is a rogue Observer sliding between universes to carry message for Bell? Is there an alternate set of Observers in each universe, with shape shifting hybrid couriers delivering information to them in briefcases?

It may be significant that the revised, 1985-style intro to the show on April 1 included in vitro fertilization among “fringe” sciences such as personal computing, laser surgery, cold fusion, DNA profiling, nanotechnology, cloning, invisibility, genetic engineering, virtual reality and stealth technology. The alternate universe’s advanced technology could have made a test tube Peter possible in 1985. Genetic engineering may be what sustained Peter 2.0, allowing Walter to reach him in time. It also could explain why Peter 1.0 was so isolated at home and prone to more illnesses. If Nina donated the egg or acted as a surrogate mother (if Elizabeth could not bear a child), this explains her emotional connection to Peter 1.0.

Xerophytes/Allan disagrees: Peter’s genetic disease is meant to establish a specific connection to Walter and Elizabeth.

Random Observation #6: Hypothermia from falling into the frozen lake could explain Peter’s loss of memory about his childhood.

Many possible special abilities were suggested for Peter: Gained naturally

To sum it up: A fire starter, a coin master, a robotic arm, and a man with LSD as his weapon. Yep, that’s Fringe!

Random Observation #7: Jessup is to Peter what Carla Warren is to Walter in terms of a moral compass or spiritual guide

Random Observation #8: In doing brain surgery on Walter in “Grey Matters,” Bell is wearing a wristband decorated with what looks like a symbol for stability. The crucial element in curing Peter 2.0 is stabilizing the formula and its chemical reaction.

G_Phunk called in during the after-show chat (as did Atmex/Tere, Xerophytes/Allan and Wormholeriders/Kenn). He converted his girlfriend into a Fringe fan and is considering doing his own podcast. The goal: give them a place to argue Fringe theories and encourage other couples to join the debate. However, he cannot cover the cost of any divorces resulting from that proposed forum.

Kenn provided a report from Wonder Con, including news of a strong Friday-night turnout for the sneak peek at Fringe’s upcoming episode “Olivia. In the Lab. With a Gun.” Kenn and several of his WR bloggers will be covering Comic Con San Diego this summer. They will fly the Fringe and TFR banner with pride! Many plot how to sneak into Kenn’s checked luggage from San Francisco.

The Editor on Social Media

That's What She Said